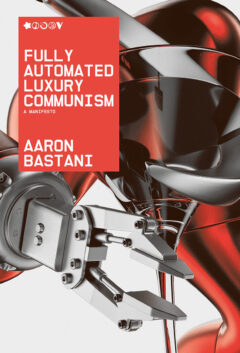 Guess this world needs its dreamers

May they never wake up….

OK, you got me: I did put that epigraph in there mainly cos I just love love love the lyrical stylings of Paddy McAloon from Prefab Sprout, true, but nevertheless I do still have a bit of a point to make with it: viz., that while the utopian impulse may well be a kind of dream, it is not merely the dream of macho ideology (as in Brucie’s case); rather, it is the dream of a possible escape from ideology, specifically the ideology of what Mark Fisher once memorably called “Capitalist Realism”1(to my knowledge, this term has earlier origins in the literary criticism of Professor Richard Godden, whose truly seminal book Fictions of Capital: The American Novel from James to Mailer credits Roland Marchand’s 1980 work Advertising the American Dream: Making Way for Modernity, 1920-1940 as coining the term.)

Capitalist realism, Fisher wrote, maintains that it is easier to imagine the end of the world (via nuclear, war, environmental catastrophe, you name it) than it is to imagine a post-capitalist one. Coming a bit more down-to-earth, practically-speaking this means that we shall continue to live under the seemingly-eternal aegis of neo-liberalism: that (per Ms. Thatcher’s famous dictum) “there is no alternative” to the economic status quo of the past forty or so years.

Neoliberalism, born with the Volker interest rate “shock” in 1979 from the terminal crisis of Keynesianism circa 1968-1973 and characterized by the Carter-Thatcher-Reagan-Clinton-Blair-Bush-Obama adherence to a “monetarist” set of policies predicated upon the controlling of inflation, of defending investment assets rather than promoting, as with Keynes, full employment, had proved remarkably capable of revivifying, for a time, the global economy. Its key policies were:

—all subsumed, perhaps, in Francis Fukuyama’s infamous pronouncement that the fall of the berlin Wall meant “the end of History” with a capital-H….

…Well, that enormity may well have lost its allure with the return to History thanks to the crises of 2008 and 2020–, but unlike in all previous major economic shifts nothing has (yet) been born to take neoliberalism’s place.

Before Covid chucked a gorilla-sized monkey-wrench into the engine of the world economy, we somehow gimped along, inequality steadily widening, growth flat-lining and interest rates at seemingly-permanent near-zero—a tacit admission that Oz was now relying on the Wizards of Wall Street to keep already-inflated assets inflating, and relying on debt-laden consumers to keep spending like it was 1999 or something. There were no new ideas, no tricks left in the bag, and so in 2016 Hilary Clinton’s campaign slogan was basically: “no, I’m not going to change much, or fund public health care or anything but at least I’m not a deplorable”. 2015 was as good as it gets, in other words.

Well, enter Aaron Bastani, with a new idea, or lots of ideas, a whole grab-bag of’em, actually—and, when all is finally revealed and taken- and tied-together, all adding up to a beautiful dream, certainly, but also a practical call to action. His thesis, that certain recent technological developments herald a possibility for a shift 2(I’m always leery of those who promote so-called “epochal shifts” from within the very belly of the beastly epoch they be allegedly shifting from (e.g. Lyotard’s post-modernism, Baudrillard’s post-real, or Jameson’s “cultural turn”), but, briefly, Bastani’s possible “third disruption” is a bit different, as it is not only non-teleological, but remains in the near-future and depends upon the outcomes of our present-day collective efforts. The first two disruptions were (i) the shift from nomadic hunter-gatherer societies to agricultural settlements, and (ii) the shift from agricultural to industrial capitalism in 1780 or so —or, depending upon how you want to look at it, the shift from feudalism to capitalism in late medieval England; or….) to a post-scarcity, post-work, post-inequality, post-fossil-fuel (and even post-meat!) world in the coming decades is…a compelling one, I must confess. I began the book “As-if!“-ing him left and right, but ended it by doffing my (wholly imaginary) cap: for he made a good argument for each (well, most) of the components of what he calls, trippingly, by the acronym “F.A.L.C.” (hint: it’s the title of his book!). And he stirred that long-lost, reclusive emotion from some Unabomber’s cave deep inside what a crime scene forensics-type might call my heart: hope, that is. Yep, you saw it here first: Bill Clarke’s flirting once more with that many-feathered thang again.

“Hey, not quite so fast, buster,” the cynical, jaded dictator (or dictatorial jade?3 (An inferior or worn-out horse, a nag. Now rare. LME.” sez the SOED—Rocinante, c’est moi!) inside me (& you, too) simultaneously sez (Jinx!)…“Just how’s all this just gonna ‘happen’, exactly?“

Well, it’s not. Unlike certain Silicon Valley execs, Bastani’s no technological determinist, let alone an idealist. In fact, he goes to some trouble to show how, on numerous important occasions in history, innovative technologies and great ideas were simply much too ahead of their time (e.g. the theologian Wycliffe’s dreaming-up the Reformation decades before either Gutenberg’s movable type or Luther’s very similar, and much more widely-disseminated, demands; or, more tellingly, Marx’s idea of a proletarian revolution occurring in a backward, still-feudal—or certainly not-yet-capitalist—Russia in 1917).

Rather, it is the politics of a given conjuncture which (can) allow for technologies to help precipitate or catalyze social change on a grand scale. But the human element remains all-important. Translation: it’s up to us polis-dwellers as to whether the technologies of the present and very-near future will lead us toward positive, if very gradual change (Bastani is no supporter of violent insurrection), or towards still greater inequality and global instability.

(“Oh, it’s up to Us, is it?” the Jade sez… “the selfsame “Us” who wrecked the planet, who dreamed up reality television and Instagram Bestlives? Etc., et cetera? That ‘Us’, hmmm?”)

Um, yes, actually. The iPhone and Twitter ain’t gonna do it for us. But certain recent developments are going to help tilt us toward possibly making the the FALCing choice for once:

Though perhaps Bastani is getting a tad starry-eyed with a few of the above pronouncements, the fact that he dares to think big is the real point here: neoliberalism’s myopic “there is no alternative” is only a recipe for stagnation, leading to a certain collapse of life on this warming planet: that there is no Green solution without it also being a “Red” one is simply about the question of whether to scale up these emerging and advancing technologies to meet the needs of the many billions of global citizens, or to keep them sequestered in First World enclaves behind patents and other monopolizing schemes, so that we can virtuously fiddle or something while the earth burns. Again, as with sharing Covid vaccine IP, it’s a political decision, not a technical one.

To that end, Bastani makes the case that it can be done by pointing to small, practical ways in which it is already being done:

No. 3 points to a related near-field possibility: given the economies of scale enjoyed by single-payer health care, why not (other than for reasons of pure ideology) agitate for Universal Basic Services (UBS), expanding Medicare to include “housing, transport, education, healthcare and information”? By way of ending, I’ll quote the author a bit extensively on this, as it will emphasise that his project is both utopian and immediately practicable:

As UBS, the intention for each is to become free public goods accessible to everyone – not as commodities for exchange and profit, but as the foundational resources on which to build their lives. That is not to say private ownership of housing, for instance, would be prohibited – it would not, but there would be a guarantee that the state would meet an individual’s housing needs if required. Market production and the price mechanism would endure, but this would become progressively rarer in those areas classified as universal basic services. With energy, labour, and resources wanting, like information, to be free, history and extreme supply would be on the side of UBS.

As a consequence, UBS will diffuse incrementally. In transport it might resemble the UK’s ‘Freedom Pass’ – which allows free travel on local bus services for those over sixty – being extended to everyone. This is sensible – as we’ve already seen, transport sits at the intersection of post-scarcity in energy and labour with extreme supply from renewable power (energy) and autonomous driving (labour) meaning the cost of public transport will fall precipitously. This should be to the benefit of users, citizens and workers – not profiteers. The UBS of progressively expanding free public transportation is the best way of ensuring precisely that.

Similarly, in healthcare, the rise of ultra-low-cost technologies in the areas of gene sequencing, therapies and editing will mean that a few decades from now public healthcare will be cheaper to administer with each passing year. But this will only be of collective benefit if we reject the notion that edited genes are the same as pharmaceutical drugs and must be subject to patent and the profit motive. Instead, the gains of healthcare becoming a true information technology should be socialised as we eliminate genetically inherited conditions like Parkinson’s, Huntington’s and sickle cell disease – much like we did with smallpox in the twentieth century.

Even such breakthroughs, tremendous and unprecedented as they would be, would represent just the first step, as the arrival of virtually free gene sequencing – which would allow us to all but eliminate early-years mortality and locate cancers at ‘Stage 0’ – moves medicine from responsive to preventative. Again, rather than propping up the profits of private business while putting millions of healthcare workers out of a job, that should mean free, universal healthcare for everyone. The alternative of allowing market rationing amid conditions of such abundance, and for matters of literal life and death, is barbaric.

The same trends are evident in housing, education and information – understood here as media production and internet connectivity. Just a few decades from now paying for a bus, or an internet connection, or a university degree or renting a home, need not be an issue. In each instance payment might feel as counter-intuitive as it would today if you were invoiced for starting an email account or checking the accuracy of a date on Wikipedia. And why shouldn’t it?

Lewis Lapham, Editor Emeritus of Harpers magazine, once wrote a piece (called “Paper Moons”) on visiting the New York Public Library to take in an exhibit on the history of utopian thought and art. He ends his editorial in the following manner: “On my way out of the library in early October I remembered the lines of Anatole France:

Without the Utopians of other times, men would still live in caves, miserable and naked …. Utopia is the principal of all progress and the essay into a better future.

Ask me where is the road to utopia, and I would guess that it probably can be found two blocks south or one block west, around the corner or across the street. Ask me to visualize the City on the Hill, and I would say that it is best understood as a “no place,” a distant light on a far horizon, a generous idea whose time has not yet come.

I’m not sure if it is two blocks south, one block west, or on the other side of down, but we gotta start somewhere, folks, and get the heck on our way here. As climate scientists now tell us, that distant light won’t shine forever, so we gotta bring it ever-closer to the horizon of possibility. In other words, who cares if Mr. Bastani’s book is 40, 50, or 90% utopian? He points the way toward practical things that we need to be doing, and he has given us a lot to argue about. Let’s talk.

Aaron Bastani’s Fully Automated Luxury Communism: A Manifesto came out in 2018 from Verso Books. Yeah, I’m only getting to it now, but from the state of the world in 2022, there’s still time to get on the bandwagon—and we’ll need a big one, I’m afraid…