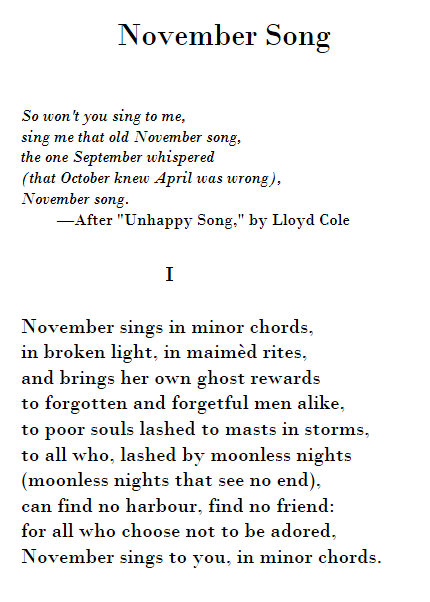 Several years ago today, the webzine The Chained Muse published the first section of my poem “November Song.” As I have been unable to find a publisher for the complete poem, I am putting it all together here for the first time, now in slightly revised form.

So won’t you sing to me,

sing me that old November song,

the one September whispered

(that October knew April was wrong),

After “Unhappy Song,” by Lloyd Cole

in broken light, in maimèd rites,

and brings her own ghost rewards

to forgotten and forgetful men alike,

to poor souls lashed to masts in storms,

to all who, lashed by moonless nights

(moonless nights that see no end),

can find no harbour, find no friend:

for all who choose not to be adored,

November sings to you, in minor chords.

as August dreams on stolen cheeks,

on the still-born arms of all that fall,

doomed to so soon depart, to be caught

by silence, want, or scorn,

on what Tuesday hopes and Wednesday mourns,

on unchanged sheets in mental wards,

(where children learn how there shall not

be more), on those lately polished window-panes

behind the friendly gates of June’s bride-and-grooms,

gates that give way to swinging doors,

on the gleanings of all she has just gimped us through

And having marched with some past success

by her older siblings’ deaths, past

all this and more, November pauses

to paint her shallow breath on our brothers’

that just give way, and which must now confess

their secret truth (of what they lack),

and scarcely dream of going back….

(as of when she pinned October to the mat) she drops

one small tear into her baby sister’s cup,

and poses for a stately, regal painting

in a thin, still untutored hand,

as aspens quiver and poplars bend

toward what cannot be grasped,

much less captured by her pen.

what  binds her to these people so,

what brings them in such awkward haste,

what makes them go, go

to such all-too-human lengths

not to stay in her moist embrace….

Her last few, fine days tempt her out

once more, to see sunset lovers

take it on the chin, to gasp at one

between stolid trees and refracting light,

but she commits herself to the summing-up,

to the fading was, to what barely is (the too soon not),

and lifts her head, leans across the bench

(as October flies on the ledge begin

to buzz —beyond the reach of her ken—

their plea, their brief defence, as their still

remains remain one more case to be judged),

nods as the prosecution plays

his winning hand, turns to the twelve

sequestered here on this year’s shelf,

and instructs them to dispute the facts

each with his or her own self: the bailiff

will order some take-out in….

“Alone at last,” she thinks (she always was),

a warm bath, takes off Satie, puts on Bach,

and strains to cast her mind past all

that she has left behind: resignation, hope,

but she gets lost in the sound

as each mortal word (mistaken/forsook,

spills from her pen to the ground

—each too-soon-hatched bird, each delicate dove

lost to a murder of crows, unheard….

Yet she cannot forget to recall

(what spring could not contain, what

what April scarcely remembered, but August

soon knew: that, after the glorious start, the rest

of her thirty day reign of the heart,

why, thirty days of rain with the less-

to play the part of the pain that pulls us

all so close to her breast….

Oh, but the subjunctive imperfect

was it the engineer’s error

or the accountant’s red pen?

—such are the questions that bring her

to picture again and again

how his face caught hers in the morning sun,

his faraway eyelids, how she yearned to run….

Through or past the “almost was”, the “couldn’t

bes” (all “just because”), still she strains to pray

through her stacks of books

through these concrete blocks (one per day),

these hermit walls that reign her close, that teach her well the cause of this defect, what has brought

her here at last, where she must submit,

and then herself perfect the silence

that she has yet to meet, of what time drops

in, into each solitary, careless

life, as though dancing to a breathless tune

sung by dry ink on one white, satin sheet….

It is an obscure moon that guides her, helps

her stay more or less true to the lines

this year drew on the page, assists her

to give form at last (now that the rage,

and the dying light have left her) to what

but was already past, a sense, a hunch,

a reach, a stab at what seems to be born

to decay (though bright girls May and June

on north end moonless nights), all just to say:

what March only dreams,  November writes.