Home / Reviews / Everything, All the Time, Everywhere: How We Became Postmodern by Stuart Jeffries (Book Review)

Everything, All the Time, Everywhere: How We Became Postmodern by Stuart Jeffries (Book Review)

Everything, All the Time, Everywhere: How We Became Postmodern by Stuart Jeffries (Book Review)January 23, 2022 W.D. Clarke
Reviews
2 Comments 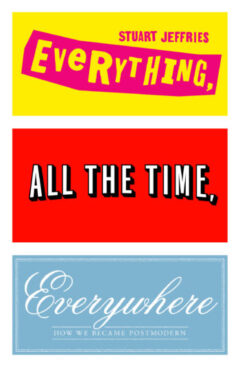 In the hopefully mock-egotistical spirit of David Foster Wallace reminding us (in A Supposedly Fun Thing I’ll Never Do Again: Essays and Arguments), on more than one occasion, that he is “an exceptionally good ping-pong player,” let me just remind you, dear reader, that I have forgotten more books on postmodernism than you’re ever likely to read 1I won’t go into the reasons for making this sad claim, except to sing a few bars of the Van Morrison/John Lee Hooker tune “Wasted Years” —and then also remind you that, after making his own over-the-top assertion, DFW then proceeds to tell us that he is simply too good a chess player to waste his time in battle against any rando who happens on the Caribbean cruise (the supposedly fun thing of his titular essay) with him … just before, that is, he then proceeds to go and lose at chess to a nine year-old (who’s taken a not-so-mysterious vow of frowns, cos her Chess Mom’s in tow)—in something like, oh, seventeen moves?.

And good for you, too, or mostly, I think. Except, for amateur students of intellectual thought and cultural histories, to know what it, PoMo, was (and, as Jeffries argues, possibly still is, in a “I ain’t not afraid of no ghost” kinda way, and more on that later), you should probably read all of David Harvey’s The Condition of Postmodernity: An Enquiry into the Origins of Cultural Change, the first chapter of Fred Jameson’s Postmodernism or the Cultural Logic of Late Capitalism, and this book here—and (oh yeah, nearly forgot!), Marshall Berman’s absolutely essential All That Is Solid Melts Into Air: The Experience of Modernity aside, that’s probably sufficient for all of the cocktail party chitchat that you haven’t been having anyway, due to the kind of agoraphobia induced by covid, or the agora itself, or reading agoraphobic DFW, for that matter.

No, this book’s not perfect (e.g. he dismisses entire, important works by two of my heroes, Terry Eagleton’s and Christopher Norris’s—The Illusions of Postmodernism and What’s Wrong with Postmodernism? Critical Theory and the Ends of Philosophy—in as little as a single sentence each, pretty much), but it’s otherwise perfect for me, in that it mostly eschews re-mapping what’s been mapped before in favour of a deep dive into the cultural products thrown up over PoMo’s2And hey did you know some of us once unironically pondered the serious semiotic implications of spelling it postmodernism, post-modernism, or (post)modernism, with or without a capital P? Jeffries, btw, favours the hyphenated post- … lifetime—from its infancy in the early 1970s through its heyday in the 1980s and early 1990s, to its sudden, abrupt, purported death on 9-11 in 2001 (or perhaps 2008), to its spectral presence in all our lives ever since, in the form of a persistent “late” capitalist economic regime, which the culture of post-modernism once paved the way for and then served (Jeffries agues, though I more than tend to agree).

So yes, this volume always has capitalism in its sights, whether directly or peripherally, when discussing each rhizomic phase and genetic mutation of PoMo, aka the power couple of Polly Valent and Neo Liberal. But it never makes the economic reductionist argument (one usually attributed by builders of straw men to what Marxist themselves call the “vulgar Marxist” belief in teleological economic “stages” in history, as well as in an economically determining “Base” and a cultural “Superstructure”, which is but the mere, passive by-product or ex-pression or epiphenomenon of said Base).

Rather, perhaps in the spirit of historian E.P. Thompson, capitalism and PoMo are seen here as dancing partners—not of the artificially yoked-together kind from the monstrosity which is Dancing With the Stars, but of the Dance With Them What Brung Ye variety, as in the economic and cultural “spheres” aren’t independent of each other, or merely mutually-influencing, but are fully and completely “shot through” (in Thompson’s words) with complexly determining traits of one another. Dance partners sporting complementary be-sequinned outfits, in other words, as gaudy and as seemingly ahistorical as the Vegas strip (in Thomas Pynchon’s terms, “like a ritzy parable of the world” ), and sewn by the same outsourced, child seamstress, somewhere far off the consumer’s walled garden’s radar and way down deep in the Global South.

Enough ritzy parables: I came for the historical refresher course (Jeffries is light— appropriately, given the book’s focus—on the economic history, and lighter still on the PoMo theory…this book is quite readable for the non-specialist, thank G-d), but I stayed for the “close readings” of the cultural products representative of the various periods under examination. From the photography of Martha Rosler, Cindy Sherman, and Sophie Calle, to the music of David Bowie and the architectural shenanigans of the UK’s Poundbury and France’s Musée D’Orsay, to the writers Kris Kraus and Salman Rushdie, my own understanding of specific PoMo artifacts was greatly improved by reading this book, and Stuart Jeffries is a superior interpreter/analyst of same (as well as a damned fine writer).

Some of the other analysands, though, have already been given a good going-over elsewhere, and thus perhaps seemed a wee bit perfunctory in these pages. These include: Margaret Thatcher, The Sex Pistols3See the exhaustive super-excellent Lipstick Traces: A Secret History of the Twentieth Century by Greil Marcus, Apple, Madonna, Quentin Tarantino, Netflix, the Debt Industry. Still, what would a tapestry of post-modernism look like without such patches?

Jeffries is particularly good on post-modern irony, to which he returns time and again, and it is well worth quoting him here on that particular habit of mind (think of the cast of Seinfeld and their relations with and attitudes toward other human beings, and you’ll get the drift):

Irony is necessarily subversive because it means the opposite of what it says; but the risk of post-modern irony is that it subverts not what it sets out to critique, but the critical agency of the message itself. Just as sarcasm is the lowest form of wit, irony is the feeblest kind of indictment. And yet it has become the go-to rhetorical stance of the post-modernist. By maintaining a cool, affectless stance, irony colludes, unconsciously or otherwise, with what it overtly disdains.

Part of the reason for that detachment, of course, was that the post-moderns lacked any faith in the “Grand Narratives” of history, that they were part of a movement or class which could affect change toward a freer, more just, and equitable world. To that extent, perhaps we Millennials-and-older are still post-modernists, than, looking toward the young, to the Greta Thurberg’s of the world, to have the spiritual or ethical strength to do what we could not? We who are a little bit like Martha Rosler, perhaps:

Martha Rosler’s work is worth reflecting on as a challenge to those who see post-modernism as a giddy, irresponsible, consumerist free-for-all in cahoots with a neoliberal system that creates unparalleled inequality. While some fellow artists wallowed in the degrading exchange between commerce and art, Rosler critiqued the society she lived in and at the same time reflected critically on the power or otherwise of art to change that society. For the neo-Marxist thinkers of the Frankfurt School, steeped in the culture of mid-century modernism, the point of art was to exist as an Other that indicted, though could not change, society. In the post-modern age, that otherness of art was no longer possible. Artists, even radical, critical ones like Rosler, were enmeshed, often knowingly, in cultural, economic and language systems they could scarcely change: under post-modernism, there could be no avant-garde.

To give you a sense of how PoMo culture is “shot through” with the economic, I will end with a long quotation from Jeffries on the book The New Spirit of Capitalism by Luc Boltanski and Eve Chiapello (1999, but which is new to me), its title an allusion to that seminal work on capitalism which so influenced the young Thomas Pynchon, Max Weber’s The Protestant Ethic and the Spirit of Capitalism and Other Writings:

They suppose there have been three spirits of capitalism, each suited to the demands of sustaining it during different eras. The first spirit of capitalism is the one that Weber recognised in the nineteenth century, whose hero was the Promethean bourgeois entrepreneur, who risked, speculated and innovated at work, but at home was distinguished by his determination to save, personal parsimony, and austere attachment to the family. In The Protestant Ethic and the Spirit of Capitalism, Weber argued that the values of hard work and progress were seen as endowed with moral and spiritual significance, and the refusal to waste money meant that a large proportion of the proceeds of capitalism could be reinvested in nascent businesses.

The second spirit of capitalism, Boltanski and Chiapello argue, existed from about 1930 to 1960. Instead of the nineteenth- century entrepreneurial hero, the second spirit’s hero was the director of the large, centralised, bureaucratic corporation. In France, in particular, the spirit that sustained capitalism during this time involved long-term planning and rational organisation, fixed career structures, self-realisation linked to security, and a common interest in satisfying consumers and overcoming scarcity.

The third spirit is one in which capitalism addresses us directly as individuals and promises us authenticity, freedom, lots and lots and lots of consumer satisfaction—and the internet:

The central organisational figure of the contemporary world had thus become the network, and the new hero of capitalism was the network extender. And the network extender was a soulmate of Zygmunt Bauman’s liquid modern – one who is always at work forging connections, a human rhizome sending out sprouts everywhere; uprooted and anxious, yes, but also light and mobile, tolerant of difference, informal and friendly.

What became lost above all in the rise of this new justificatory spirit of capitalism, and the supposedly anti-hierarchical notion of the network, was social class. Marxism relied on this hierarchical, arboreal concept in accounting for social division and capitalistic exploitation. But, like Marxism, class was purportedly obsolete. Social exclusion became the preferred term to account for the oppressed or excluded. It was as if the problem were not how capitalism systematically exploited workers, but that there were some in society who remained outside the network. The corollary was obvious: what needed to be done was not the overthrow of capitalism, but the extension of its network so that all fell within its grasp.

We haven’t yet reached the end of post-modernism, in other words (though it is said to have peaked in the wider discourse in 1997), much less the end of its speed-fueled4I just bought a new mechanical keyboard, and inside the box was a football-shaped little pill which, a little Googling (or, rather, DuckDuckGo-ing) informed me was an amphetamine: the overstressed Chinese worker who packed the box no doubt dropped it there by accident. I, feeling a certain amount of First World guilt here, do hope they made it through their shift all right, and long for the day when Fraternité and Egalité mean something for once (if not “again”). Forget “Liberté”, though, that term’s perhaps a bit too burdened with two centuries of liberal imperialist history too many… dancing partner, neoliberalism. The ghost of the one still haunts the not-so-glitzy internet ballrooms and bricks-and-mortar strip malls and Maquiladora sweatshops of the other. Whatever comes next, I do hope it comes soon enough to save the planet rather than raze it more completely. Who knows? Not me, though the kids might. The kids are all right, pretty much.

2 Responses to Everything, All the Time, Everywhere: How We Became Postmodern by Stuart Jeffries (Book Review)